The 2014 55+ Ski Club Ski Trip to Windham Mountain was attended by 23 persons compared to 17 persons in 2013.
We returned to the Evergreen at the  Thompson House.  We had a first  night pizza party in front of the nice fireplace
in the lobby and then had a  “Super Bowl” party where we watched the Seahawks blow out the Broncos by a score
of 43 – 8.  Skiing was very good with much better snow coverage than we had seen in previous years at  Windham.
After two beautiful  blue-sky days, we had a powder day on Wednesday with approximately 10 inches of  natural snow.
However, nearly one-half of the group left early for home on Tuesday afternoon in advance of the approaching storm.
After feasting on snacks and drinks in front of the  fireplace for après ski, our group dined together at excellent local
restaurants  on Monday, Tuesday, and Wednesday evenings. 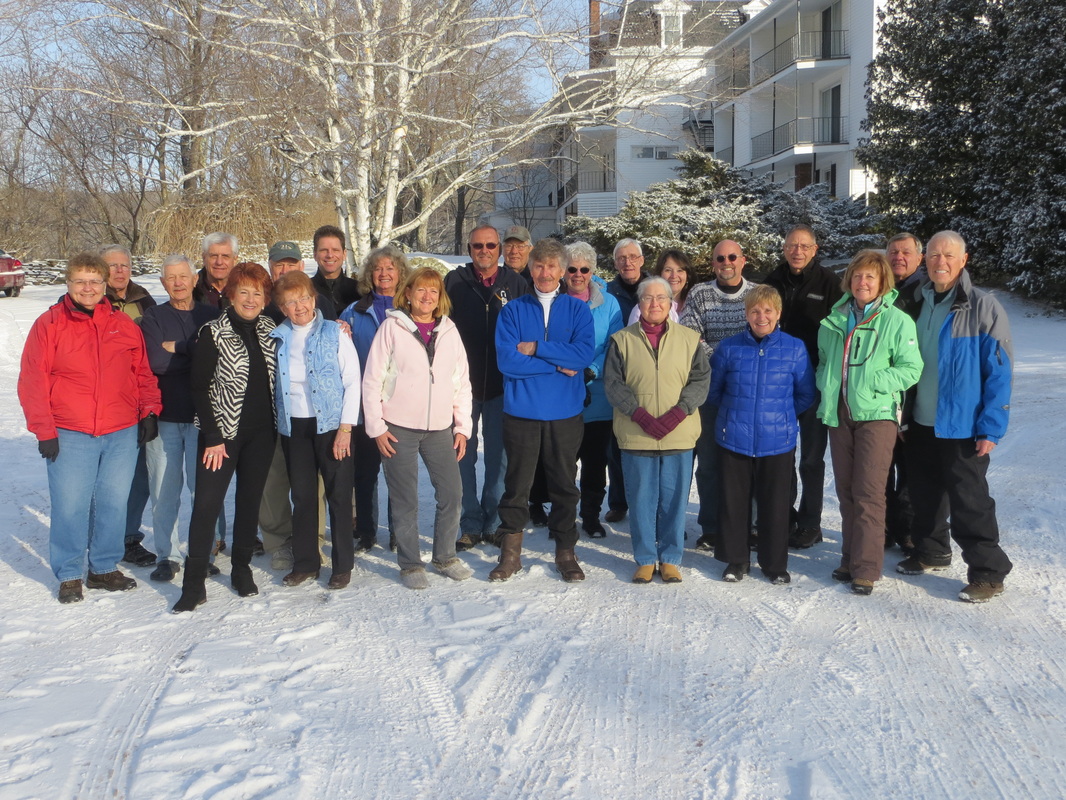 We had a beautiful day with  excellent snow conditions.  A  total of 47 persons attended including 32 racers and 4 officials (Timers: Connie  Middleton and Bill Reiner; Scorers: Randy Gutacker and Bruce Neuhauser) The race course was set up under
the supervision of Jeff Beinhaur, who was the starter.
The top three women finishers were 1. Inga Coulter, 2. Deb Gutaker, and 3. Barbara  Humphries
The  top three men finishers were 1. Rick Mailey, 2. Dennie Middleton, and 3.  Richard Davis

After an excellent luncheon  in the crowded Alpine Room, new members were introduced and John Johnstonbaugh
was elected to serve as treasurer replacing Roy Debski who had resigned after  two years of excellent service.
In addition to a bottle of wine presented to each of the 6 top three  finishers, a beautiful 50th  anniversery Roundtop Mountain Resort wine glass was presented to everyone in  attendance.  14 skiers were given 8-hour all-mountain lift tickets compliments of  Roundtop Mountain Resort; all others had season  passes. 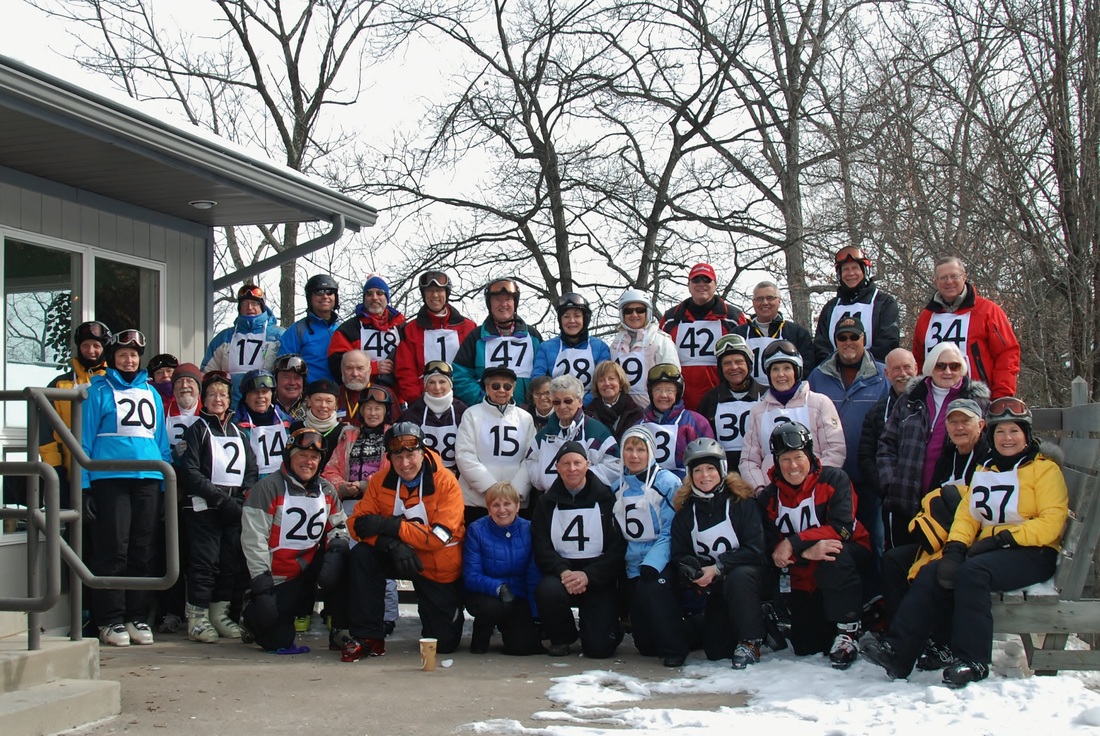 This year 38 persons traveled to Stratton Mountain compared to 27  last year.  We stayed in adjacent
rooms at the newly renovated Black Bear Lodge (formerly the Stratton Mountain  Inn).
We had a first night pizza party in a lobby adjacent to our rooms where  we also met each evening between 5 and 6 pm for snacks and drinks.   Carina Thorsson, owner of the Gray Ghost Inn (our home on past Club ski  trips to nearby Mt. Snow),
was a surprise visitor on Monday evening.   Skiing was excellent on well-groomed trails covered by an inch or two of  new snow on two of the four nights.
The weather was very cold, with good visibility and light winds.  This was an excellent trip and everyone
seemed to have a good time and made new friends. 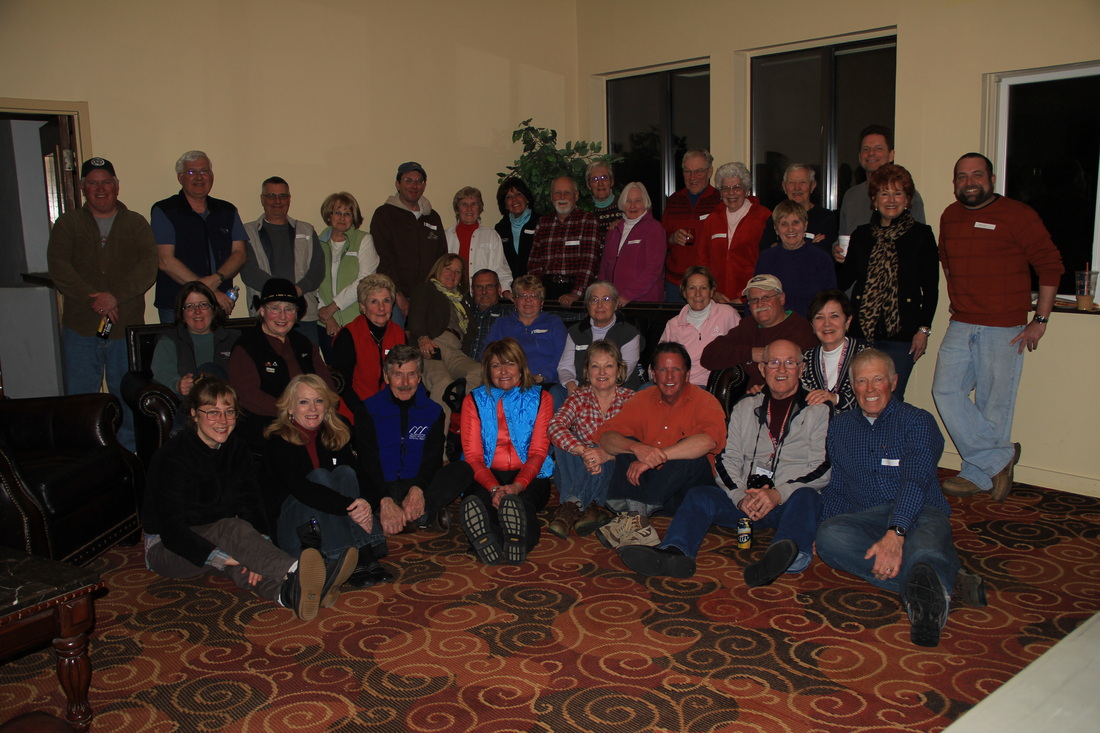